News at the website: 12 pictures of my 1st slave as ponygirl was added yesterday. 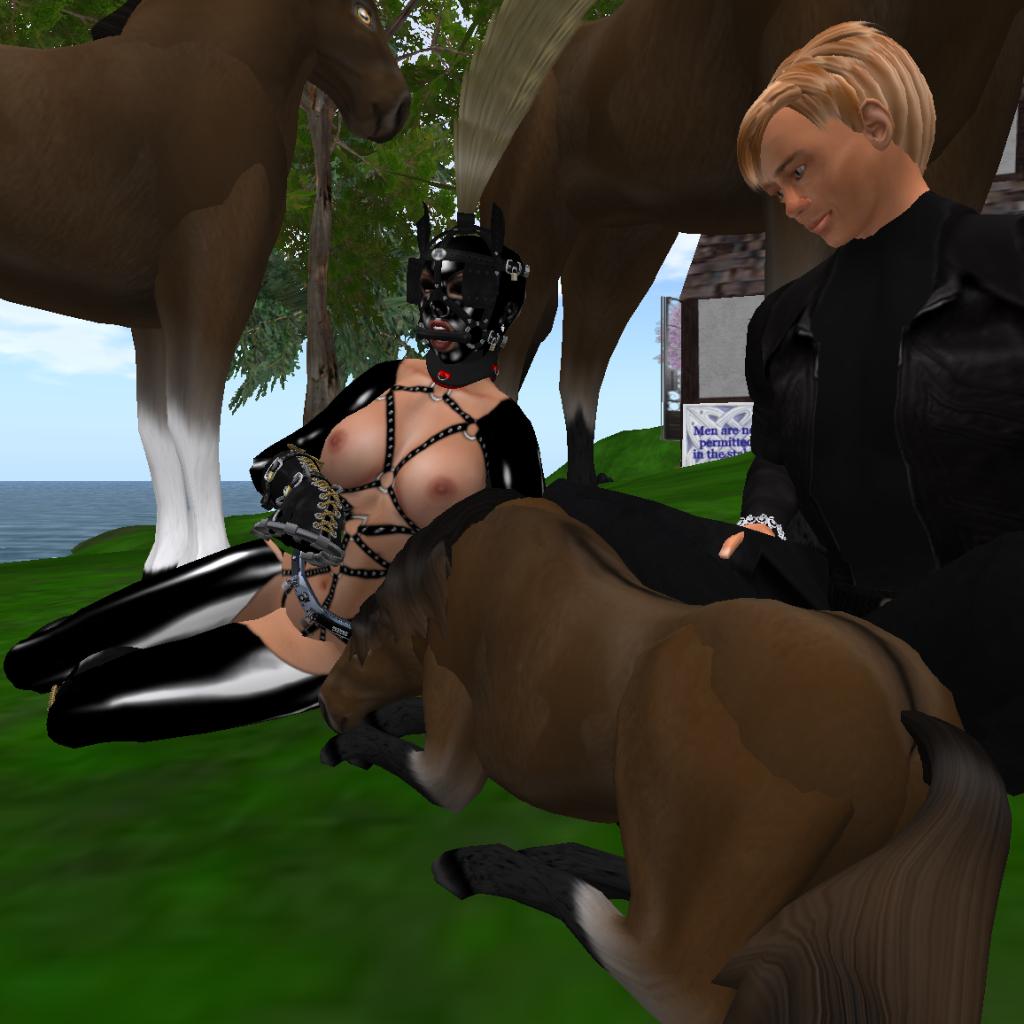 Posted by Magnuz at 5:35 AM No comments: Links to this post

Sunday, I started training my 1st slave as a ponygirl. We have been discussing it for some time, and although she wasn't very enthusiastic about it at first, she finally grew to embrace the idea. I guess it helped some that she got an excuse for wearing a very sexy latex harness outfit. Now, I admit I hardly know the first thing about ponygirl training, so this will be learning for me as well. I probably should read up some on the subject, but I prefer doing things my own way, not caring much about what's orthodox or not.
After my slave said she didn't know how she was supposed to be as a good pony, I sat down and wrote a little list about what I expected of her. Some points on the list are pretty technical, owing to requirements from her pony gear: pony boots, hoof mittens, tail and head harness from Mesmerize Dungeon and pony HUD from Morbid Play. The boots require practice to walk and the tail time to be able to take larger tail plugs. My list of aims for her training is as follows:
I also added a number of links to other blogs at least partly about BDSM in Second Life to this blog, wanting to offer other views on the subject than my own. The beginning of the list is personal blogs, followed by community and commercial blogs, and last the blog of a fashionista who wrote a very kind review of my site in Second Life.
News at the BDSM Institute: A simple pony training round was added around one of the sitting groups yesterday, with a central leash holder and cones for the pony to maneuver around.
News at the blog: A list with links to other SL BDSM blogs was added today.
Posted by Magnuz at 8:45 AM 1 comment: Links to this post

Posted by Magnuz at 5:51 PM No comments: Links to this post

As long as a variant of an activity doesn't really damage other people or violate common laws, it can not be objectively deemed superior or inferior compared to any other variant of it.
Posted by suz at 10:09 PM No comments: Links to this post

The bondage stake is a one-prim furniture containing 63 custom-made animations for binding people to the stake in various positions. It also emotes the positions as they're chosen from a simple menu system. The stake does not take advantage of RLV or Xcite!.

Position 26
standing on knees in strappado

Posted by suz at 11:47 PM No comments: Links to this post